We thought we would give you a small insight into the equipment we are using for our streams. We’ve tried with most of our hardware to find something in the middle range between utterly amateur and totally professional gear – also keeping our budget in mind! 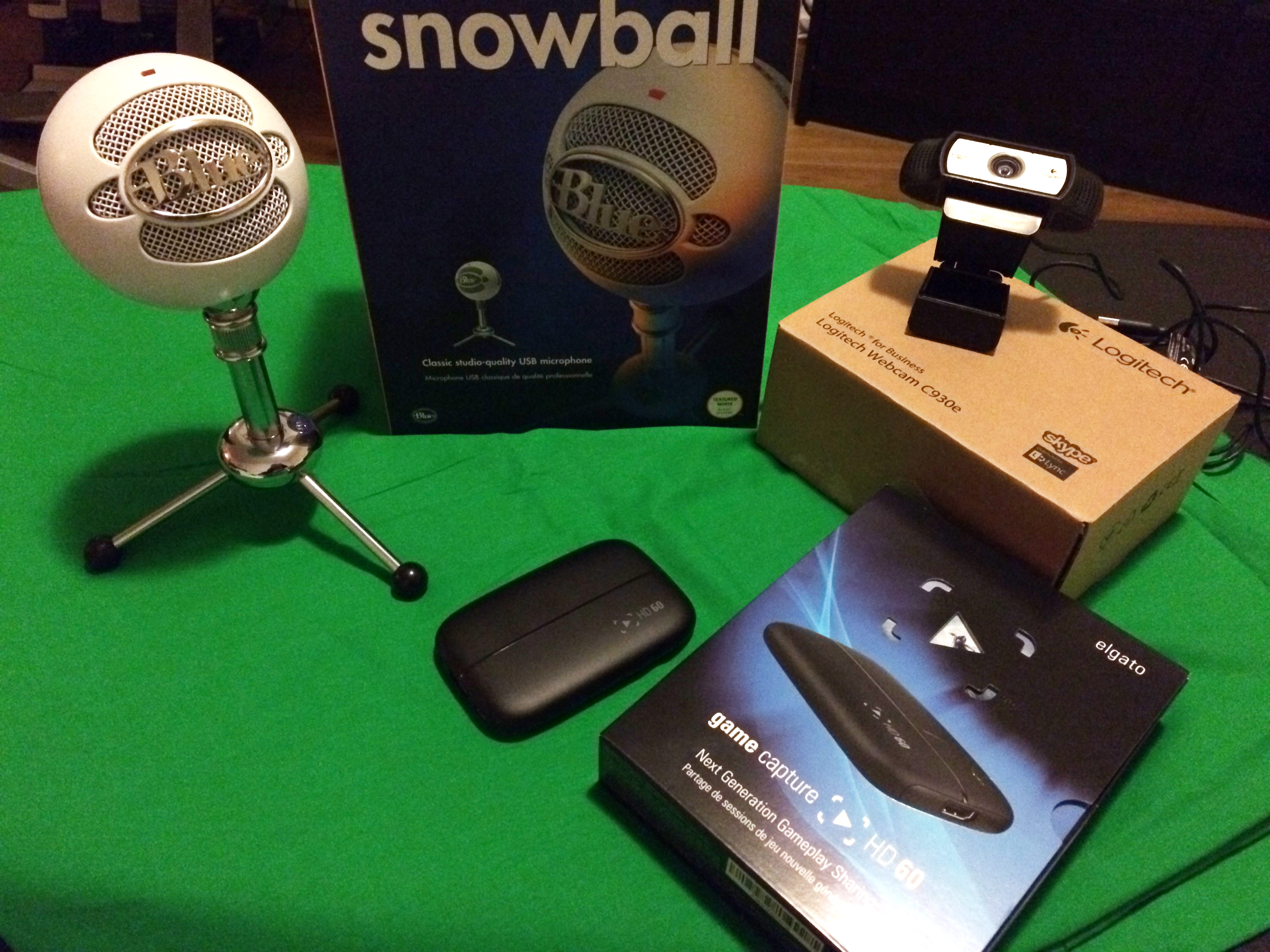 Video
For video footage of our excited game faces we got the Logitech C930e HD Webcam. We are really liking this webcam because it is HD quality, because it has a really good zoom function and it has a very wide-angle view so you can see all of us in a row on the sofa. We were very pleased to be able to use it during our Palmyra event to capture the whole audience in good quality. Also, this webcam can be screwed onto a tripod (or gorillapod) and placed nearly anywhere or attached on nearly anything.

To enhance this video footage we decided to buy a chromakey green screen of 2,5×3 meters. This is basically just a green piece of fabric which you can find in tons of stores, with or without frame. We got ours at Kamera Express. This was a good investment, because we want all of us to be visible, but we don’t want half the screen to be occupied by our living room wall. Sure we still need to perfect our hanging system (duct tape was not doing it last time) but it’s been fun playing around with the transparency and having holes in our bodies where the VALUE logo used to be ;).

Sound
For sound we have been relying on the Blue Snowball Mic. For us, this is a really decent microphone because you can alter the settings to pick up conical or ambient sounds so you can hear all of us speaking around the mic. The only down side is that we usually have to lower or mute the sound of the TV to avoid getting a double game-sound feed. On some streams we have had more complicated setups that include skype calls and headsets in the mix as well.

Software & game capture
For the video feed of the game itself, our setup and equipment depends on whether we are playing on PC or console. When we play PC games, we are using Caeda’s gaming PC with dual monitors. We then run Open Broadcasting Software (OBS), which is freeware that anyone can use to stream to a number of platforms, on one of the screens. We run the games on the other screen which we then capture through OBS. Although it took a bit of time to set up, OBS has a lot of functionality with setting up overlays (images, webcam feeds, various sound sources and texts) and also makes it easy to both stream and capture at the same time.

For console games, we usually end up using Jaromirr’s, Dr Random’s or Megalithic’s PlayStation4 – depending on who has the game we are planning to play. Initially we used a PS4 camera, but recently we got the Elgato Game Capture HD60. We had some issues with the settings initially and the Elgato software crashing – apparently an i5 processor is not enough to stream properly in HD quality with 60fps (n.b. the i5 is sufficient for capturing, but i7 is needed for streaming). We tried running it on a gaming laptop with an i7 but had some compatibility issues with Windows 10. Ultimately, when it works it works great, although the demands on the computer running the software are so high that video quality tends to drop or freeze if the game is quite action heavy. The overlays are a bit less flexible than in OBS. We have found out how to both capture and stream simultaneously, but we were sad to find out that if you want to do both at the same time, it lowers the quality to max 30 fps.